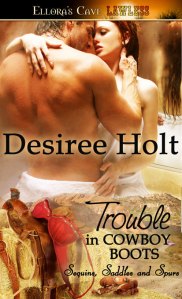 Book one in the Sequins, Saddles and Spurs series.

By reading any further, you are stating that you are at least 18 years of age. If you are under the age of 18, it is necessary to exit this site.

An Excerpt From: TROUBLE IN COWBOY BOOTS

Emily Proctor slammed the hood of the car and looked at her two friends.

“I don’t have a clue what’s wrong with this clunker, but I jiggled everything I could. See if it starts now.”

They’d set out from Las Vegas, the three of them, refugees from downsizing, with nothing but this whale-sized bucket of bolts, a few possessions, prepaid cell phones for emergencies and the grand total of three hundred dollars between them. West, there was only California and LaLa Land so they’d headed east, away from the desert heat. They’d expected the car to break down somewhere, just not on a highway with nothing around them except pastures and cattle. They hadn’t even passed another vehicle in almost an hour. And it was hotter than nine kinds of hell.

Emily’d pulled her thick mane of sable hair back into a pony tail. Now she lifted it off her neck where it rested limply and used it to fan her skin. If this was a nightmare, she wanted to wake up right this minute.

Lola Lamont wriggled in behind the wheel. One blonde curl from the mass of curls piled haphazardly on her head and held in place with a clip fell forward onto her forehead and she brushed it impatiently away. Stretching out her long, showgirl legs and straightening the t-shirt that barely concealed breasts that were the envy of every other girl in the shows, she worked herself into place on the seat. Letting out a long, slow breath, she carefully turned the key. The motor coughed, gurgled, groaned and finally turned over with a sound that set all their teeth on edge.

“At least it started again.” Lola sighed. The 1966 pink Cadillac convertible was her contribution to their road trip. “This old gal has been very good to me.”

“It may be time to put her to sleep,” Roxie snorted.

“Roxie!” Lola did her best to look affronted.

“I’m with Rox,” Emily put in. “You think this hunk of junk will at least get us to the next town?”

Leaning against the car, Roxie fanned herself with her hand. “It better, or we’re gonna burn up like fried chicken.”

“All right.” Emily dusted her hands off on the seat of her jeans shorts. “Rox, get in the car. Lola, you drive. Roll all the windows down to catch some kind of breeze and pray as you never have before that we hit civilization before this thing rolls over for the last time.”

The grand adventure they’d tried to make this was turning into a grand pain in the ass. If they didn’t light somewhere soon they’d be in bigger trouble than they’d had in Vegas.

No one said a word as they rolled down the highway, each mile unwinding beneath them with unbearable slowness. Emily knew they were sending up silent prayers to the gods and the fates and anyone else who would listen.

Just as the engine was beginning to make threatening noises again, signs of life emerged. Smack in the middle of the highway sat a town. If you could call it that, Emily thought. A far cry from the glitz and glitter of Las Vegas.

But it had a main street, cross streets running into it and, lord have mercy, a cafe, where the car heaved its last and died.

“At least we’ll be able to get something cold to drink,” Roxie sighed.

“You better hope it’s cheap,” Lola warned. “Maybe we could all share one.”

“Maybe we could just go inside and see what’s what.” Emily blew a stray hair away from her face. How in god’s name had she ever thought this would be fun?

‘“What’s what’ better be a way to get that hunk of junk fixed,” Roxie said, climbing out of the car.

“As if.” Lola tugged on her very tight white shorts and brushed at her hot pink tank top. “The only way that’s gonna happen is if we rob a bank or win the lottery.”

“Right now we don’t even have money for a lottery ticket,” Emily reminded her and sighed. “Okay. Let’s go see what’s inside. Hopefully they have air conditioning or we might sweat to death.”

The inside of Blue Belle’s looked so cheerful Emily almost threw up. Booths among one wall were upholstered in what she could only call an electric blue and the scattering of tables and chairs had cheap vases of artificial blue flowers on them. Every available space on the wall was filled with more pictures of bluebonnets than she’d ever seen. Not that she’d seen that many.

At three o’clock in the afternoon the place was mostly empty. The first thing Emily noticed was the blast of cool air that greeted them. The second was the three men sitting at a corner table. They all looked up as the women trooped in. If Emily had been in a better mood she’d have checked them out. Right now all she wanted was cold liquid, not a hot man.

The three of them plunked down in chairs at a table near the door. Roxie picked up the menus stuck between the salt and pepper shakers and fanned herself. A woman in jeans and a blouse the loudest blue Emily had ever seen came out from behind the lunch counter.

“Y’all look like you’ve just been dragged through hell,” she commented. “What can I get for you?”

Roxie stopped fanning herself and looked at the plastic-covered menu. “We’ll have the large Coke.”

“All of you?” the waitress asked.

The woman stared at them for a long minute then shrugged. “Okay. One Coke. Three straws.”

“Couldn’t we each just get a small one?” Lola whined.

Emily bit back the retort that bubbled up. “Even a small one is more than two dollars,” she hissed. “They probably think they’ll get rich on strangers coming through.”

The woman returned with a huge glass filled with the bubbly soda, plunked it down on the table and slammed three paper-wrapped straws beside it.

“She probably figures she won’t be getting as tip,” Lola giggled.

“She’s right,” Emily said and picked up one of the straws.

They were each taking small sips, savoring the icy cold liquid, when the waitress returned with two more large glasses of coke and set them on the table.

Emily looked up at her. “Um, we didn’t order those.”

“I know.” The woman’s voice could have curdled milk. “Your friends over there did.”

“My friends?” Emily frowned. “I don’t have any friends here.”

The voice was deep and so smooth it sent shivers of delight dancing along her spine. She was vaguely aware of a chair scraping on the floor next to her and a body folding down into it. When she forced herself to look at the occupant she nearly lost it. A typical cowboy hat sat atop a head with thick, sun-streaked brown hair long enough to touch the collar of his chambray shirt. Hazel eyes with flecks of amber and green were watching her with an amused look. Sensuous lips turned up in a slight grin that softened the harsh angles and planes of his very masculine face. Faded jeans covered long legs that he crossed with one ankle resting on the other knee, giving her a good look at dusty, but obviously expensive, cowboy boots. Hand tooled. Emily had seen enough of them on high rollers in Vegas.

This entry was posted on July 28, 2010 by sarahmastersauthor. It was filed under Ellora's Cave, Fab Day!, Writing and was tagged with Desiree Holt, EC, Ellora's Cave, erotica, Trouble in Cowboy Boots.