As slumber’s embrace held me tight, and I dreamed of nothing I can remember now, the sun’s pregnant belly rose over the horizon, the day keeping the secret from me a little longer. The secret that when I woke, the ills of yesterday would be gone. Not completely; no, they are still there, but the strength to deal with them has returned, to think of them as nothing but bobbles on a well-loved cardigan or a speck of dust on a recently polished desk—you wish they weren’t there but they are easily ignored.

I opened my eyes, and evil thoughts, coming in the guise of a creeping spider with carefully placed, light footsteps of stealth, seeped into my mind. I would not entertain them, bade them farewell, and surprise that they retreated without a fight brought a relieved smile. That curve, that tweak that shows the world I am happy, I am me again, had returned. A weight lifted, literally, and I turned in bed to find my angel had come to wake me up.

I asked if my eyes were puffy, if I looked wrinkled and old, and he stared down at me and said: Just puffy, not wrinkly or old. And he stared at me with such love that I wondered how a man such as him can look at someone such as me like that. Someone who thinks evil things and allows the darkness to claim her one too many times. But even that thought was an evil one brought on spiders’ legs—they had come again almost without my notice—and I shoved them away, thankful for the love in his eyes and the touch of his hand on my face.

I rose, the sun’s rays struggling through the curtains, and realised my body had lightened some more, as though the proverbial weight of which we speak was an actual burden. Weighty and oppressive. Tangible. And I smiled again, glad that it had gone—whether it be just for now, or whether it will return later doesn’t matter. This second matters, and then the next, the millions of them bleeding into minutes and hours and days and weeks and months.

The previous night I had dreamed of strange faces made of dull, black rippled silk, morphing into terrible shapes that had no authority to be in my head. These faces, these figures were my demons, all the badness manifesting into something I could see, something that gave them meaning. And what were they but ugliness? Gyrating bodies and scowling faces sent to push me to the edge, to pull me from sanity into madness.

They are gone now.

Angels come when darkness calls, as they always do. When my wings are broken, when I can’t fly, they lift me up and take me where I need to go, showing me the direction that I can’t see because it’s too murky and my sight is shrouded in pitch. Each of them brings their unique burst of light, throwing illumination on my tempest and highlighting the eye of the storm. And I see it then, when all the angels show me the same thing.

There is one more angel who has work to do.

That angel inside me who, broken many times in the past and reformed, with new feather growth and the drive to fly alone, must regenerate again. And she does—she did this day—and it is like the yesterdays never were. Like the silent hiss never existed. How is it that two days can be so different? How is it that twenty-four hours ago I sat here, despondent and weary, with no hope of ever feeling hope or happiness? How is it that today, the mettle, the nerve, the vitality has returned?

It was the prayer: Oh, God, help me. Somebody please help me.

Someone heard. And they listened because it was heartfelt and I meant it.

They did not give me what I asked for—no, they couldn’t do that; what I asked for was evil. What I requested wasn’t what I needed. They knew, and they waited, gifting me with strength instead of the wretched thing I wanted.

I ponder whether my wanting of such terrible things is why the darkness comes. Is it a sign that I am secretly evil? Or does everyone, even the purest, kindest person, have thoughts as nasty as mine? Even if only for a second, do we all have those imaginings, only to be startled by their ferocity, our cheeks hot and flushed at the shame of ever having thought them?

I didn’t wear sunglasses today, despite the puffiness. Despite the wrinkles that are there, even though my angel said they are not. Perhaps he doesn’t see them. Perhaps he does and he loves them because they are a part of me, testament to the years we have been together. When we met, the wrinkles were few and far between, and now…now they are carved into my face, every line proof of the laughter, the scowls, and life. I should not wish that they aren’t there—not if they are the story of the years. Not if they are evidence that I have lived. Memory crevasses, each and every one.

Oh, that one was when you made me laugh so hard I couldn’t breathe.

That one was when you made me proud, when I made you proud.

And that one…that one right there, the very first new wrinkle after we met, is the joy you have brought to me. Of those kinds of wrinkles I have many—thousands of them, barely seen, brought by people I have met along the way. All angels at some point in time, some to remain in my life and others not, but they visited all the same.

The silence here is beautiful, not only that in my sanctuary but that in my mind, my soul.

The instant dark, moody Mac Moreno claps eyes on Callie, he knows he wants her. Her lush curves turn him inside out and have his libido racing from zero to sixty in three seconds flat. Burning up the sheets with this sassy, sweet lady brings him back to life. But when her stalking ex hunts her down, will Callie run?

Not if Mac can help it.

Writing, A Day Off & A Couple of Covers 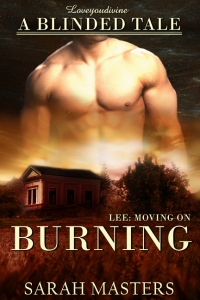 Thursday is usually my day off because my daughter, Nat, comes to visit. Unless I’ve got too much to do, steeped in a book, I take this day to forget about writing-based stuff and just be me. The problem is, my body and mind usually give up on me when I slow down or rest, and Thursdays see me dog tired by about three o’clock.

Anyway, I’ve been writing this week and gave myself two days to finish Burning. Unfortunately, as is usually the way with me, the book will be longer than my estimate. I’m a pantser, and my books usually evolve as I write them. The book took a different direction to my original intention, which will add another 6K to the book. No matter. So long as I know where I’m going with it, whatever word count I end up with is by the by. It just means another couple of days writing it, that’s all.

After Blinding I want to write my part in the book I’m co-authoring with Jaime Samms then it’s back into my latest EC book. Once those are done, I can start Inferno, the 3rd book in the Blinded series. It’s all go, but I’m happy with that at the moment. I have my to-do list under control and don’t feel so overwhelmed with everything on it.

I’ve been so busy this week I haven’t been walking with the girls at night. By the time seven o’clock rolls around when we usually set off, I’m shattered. My mind is drained, and the last thing I feel like doing is giving my body a battering too. But I’ll be back to walking Monday next week, because I’m determined to have Burning and my co-author scene off my list.

I’ve created a couple of covers for LYD authors. I enjoyed making them. I love doing cover art. When I go into Photoshop, I concentrate so hard on what I’m doing that everything else fades away. Here they are: 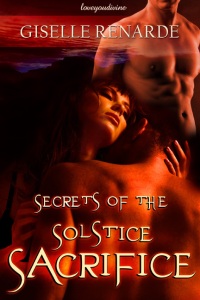 Hmm. That’s about it from me as Sarah Masters/Emmy. The other me, whoa, she’s having a ball with EC. One book out, another due in July, edits coming soon on a novel and a totally groovy review has given me hope that I’m onto a good thing with her. She’s been well received in various places so far, which is lovely because I did worry, using another pen name, what it would be like being a ‘new’ author again. It’s been great. Better than the first time around. I’m comfortable with her voice in her books—bonus!

Well, I’m off for a day of talking to Nat and pottering about the kitchen tidying up. I do plan to write about my ‘24’ and Lost addiction at some point, so if you’re also a fan, it would be good to read your take on the programmes. TTFN!

My daughter and best friend, Nat

I’m constantly amazed by the beauty inside my best friend, Nat. She is one of life’s angels. She has endured a lot in her nineteen years, and if anything can go wrong it goes wrong for her. Yet she ploughs on with a happy face and sees things through to the end. She’s determined to succeed in her profession to give her son the best life she can, and although inside she’s sometimes anxious and scared of what’s ahead, no one would ever know. She comes across as super-confident, happy, and that nothing can get her down. She’s a lot like her mother. Maybe that’s why we get along so well. We both have immense empathy for those less fortunate than ourselves. We both worry about things going on in the world. I use my life to touch people with my words. Nat uses her life to touch people with her presence and knowledge. She’s training to become a social worker—one who will do everything she can to make life better for others. She has worked with young children and the elderly, giving her time and patience, her caring and just her beautiful self. I love her.

She visits me every week, and every week I tell her my woes, and every week she fixes them. If she can’t fix them she talks to me until I find a way to fix them myself. This week she fixed me, took a little weight off my shoulders, and today an envelope arrived in the post from something she had done that took the weight completely away.

What did I do to deserve such a terrific person in my life? One who stands by me whatever the weather, metaphorically holding the umbrella if it’s raining or giving the sun cream if it’s hot. Providing the glue to mesh my frazzled nerves back together or healing the blisters I’ve acquired from walking hard and long.

I wish her a life of beautiful sunsets, where every moment is as pretty and calm as the setting of that sun, where nothing hurts and nothing is too difficult, where she can live a life free of angst and full of happiness.

I thank my lucky stars every day for my best friend, Nat.