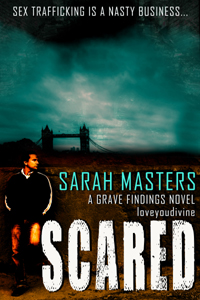 Scared is the novel expansion telling what happened after the boys in Grave Findings set up home together. The past has a habit of sneaking up on you…

The gangster: Frost hires thugs to kidnap young boys and sells them to punters, making thousands in the lucrative sex trade. He needs taking down, but is anyone out there strong enough to do it?

The employee: Croft works for Frost, looking after the young boys held in captivity. He had been abducted himself, but Frost decided to employ him instead. Will Croft always do Frost’s bidding?

The witnesses: Russell and Toby needed finding. They’d witnessed far too much. Frost isn’t about to let them spill the truth on what he’s really doing on the outskirts of London.

One sex ring, two lovers, and a host of other people, all bound together. All scared.